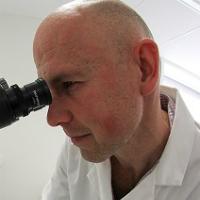 Early life experience shapes physiological responses to internal and external cues later in adulthood and has a long lasting impact on health and behavior. Amongst the numerous factors important for development, exposure to steroid hormones, including androgens, estrogens and glucocorticoids, during a narrow window limited to the perinatal period or puberty, have been demonstrated to organize specific hypothalamic and telencephalic nuclei in most vertebrates and allow specific behaviors to be activated later in life. The focus of my research is to investigate factors responsible for the determination of cell phenotypes and molecular pathways linked to reproductive and aggressive behaviors, following testosterone challenge. Over the past decade, it has become clear that steroid action can be modulated in vivo by distinct mechanisms. It is established that 1°) modulation of steroids can occur at the level of steroid delivery to the target tissue, 2°) the steroid identity and/or potency can be modified through local metabolism or, 3°) steroid action can be modulated at the level of the target gene through an increase or a decrease of transcription efficiency affected by epigenetic factors.
The goal of my lab is to provide an integrated model of the different components modulating steroid action. The main models used in my lab are cell lines and Japanese quail. Students are invited to participate to one of the numerous projects and will learn some of the techniques used in my lab, including some molecular biology, brain histology, biochemical and steroid assays as well as behavior. Students will be expected to read the literature associated to their project, analyze and interpret their data and write a report on their findings.

Biography:
I studied biology at the University of Liège in Belgium and at the University of Bergen in Norway. I then move to the private sector and worked in a Major biotech company in Liège, Eurogentec SA, while earning my Master in Biotechnology. But basic science was what I really enjoyed and studied the importance of steroid receptor coactivators during my Ph.D. with Professor Jacques Balthazart, at the University of Liège and with Professor Gregory Ball, the n at The Johns Hopkins University. Most of my work was performed on Japanese quail, an excellent model to investigate the influence of steroid hormones on behavior and the underlying neuroplasticity! I then went to the University of British Columbia, in Vancouver, Canada for a postdoc with Professors Kiran Soma and Geoffrey Hammond. I was still interested in the modulation of steroid action and focused my investigations on a steroid transporter, the corticosteroid binding globulin. I had the chance to work in the field on 2 local avian species, the white-crowned sparrow and the song sparrow. I went back to Belgium and worked as a research associate until 2012, continuing my projects on the modulation of steroid activity. I moved to Ohio University in 2012 as an assistant professor and in 2014, moved again to France as a full professor with the University of Rennes 1• Equipe 6 | Transcription, environnement et cancer [Trec]